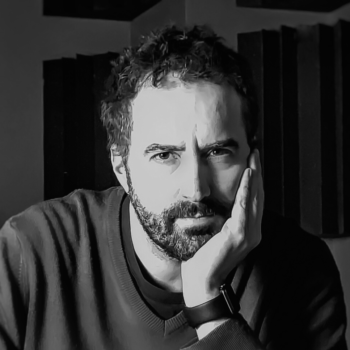 Perhaps best known for his contributions to blockbuster franchises such as Harry Potter, Dead Space, Evil Genius, RuneScape, Theme Park, Warhammer and the Command & Conquer game series’, Hannigan’s music effortlessly straddles the indie and mainstream arenas, transcending the stylistic expectations and constraints of genre, delivering a compelling and recognisable voice all of its own.

Hannigan’s work for TV and Radio includes BBC America’s Primeval, the award-winning BBC adaptations of Neil Gaiman’s Neverwhere and Good Omens, Amazon/Audible’s Alien trilogy and Terry Pratchett’s Unseen Academicals  – and his unique and emotive music can be heard regularly all over the world in countless shows, commercials and trailers – ranging from Early Man to Top Gear.

James Hannigan has recorded with several world-class orchestras during his career so far – ranging from The Philharmonia Orchestra, The Chamber Orchestra Of London to the The Skywalker Symphony Orchestra and Slovak Symphony Orchestra –  at locations such as Air-Lyndhurst, Abbey Road Studios and Skywalker Ranch.  An audio enthusiast with an arsenal of vintage synthesizers, processors and sound manipulation tools at his disposal, James considers himself a sound designer as well as a composer, taking a profound interest in the interplay between sound and music in everything he does. Films featuring James’s sound design include New Line Cinema’s Lost In Space.

An interviewee and/or contributor for BBC Radio, Classic FM, BAFTA Conversations With Composers at the Royal Albert Hall, BEEP and many others, Hannigan has had his music performed globally by Video Games Live, The Eminence Symphony Orchestra, The Royal Philharmonic Orchestra, The Philharmonia and other ensembles, and he writes using words as well – once penning the first Audio-related cover feature for Develop Magazine.

James is represented by COOL Music in London.